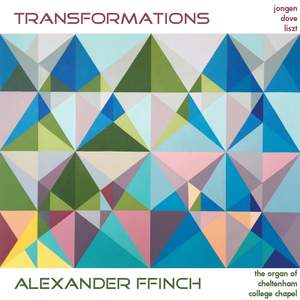 Alexander Ffinch puts Cheltenham College Chapel’s organ through its paces in fine style. Its symphonic heft is vividly felt…[he plays] with the agility of an Olympic slalom skier. — Choir & Organ, July 2019, 5 out of 5 stars More…

Three major organ works: one from Liszt, one of the masters of high Romanticism and bubbling virtuosity; the powerful Heroic Sonata of Jongen and the first commercial recording of the delicately figured piece ‘The Dancing Pipes’ by Jonathan Dove, one of today’s most appreciated composers. This superb program is titled ‘Transformations’ as each piece contains musical transformations of themes; it also reflects the transformation of the fine Norman & Beard organ at Cheltenham College Chapel – this is its first recording since a full restoration in 2017. Alexander Ffinch studied at the Royal College of Music and was organ scholar at Keble College Oxford. He gave over 100 recitals as resident organist at Lancaster Town Hall and continues to undertake a busy concert and broadcasting schedule. Alexander was appointed College Organist at Cheltenham in 2004 since then he has played daily in the Chapel as well as giving regular recitals; he oversaw the 2017 restoration and manages the work of both students and visiting recitalists.

Alexander Ffinch puts Cheltenham College Chapel’s organ through its paces in fine style. Its symphonic heft is vividly felt…[he plays] with the agility of an Olympic slalom skier.

This is one of the finest recordings of an organ I have heard for some time, the microphone placing being absolutely perfect. Ffinch's interpretative insight is splendid – genuine performances from a manifestly gifted musician and technically accomplished master. This disc is very strongly recommended.