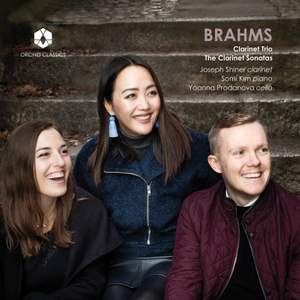 Brahms: Trio for clarinet, violoncello and piano in A minor, op. 114

Joseph Shiner and Somi Kim perform the last chamber works ever written by Brahms: his Clarinet Sonatas, heard here alongside his sublime Clarinet Trio, for which they are joined by cellist Yoanna Prodanova. Brahms was so enchanted by the playing of clarinettist Richard Muhlfeld that he came out of retirement in order to write four chamber works for the soloist. Three of those works are featured on this album, interpreted by the exciting up-and-coming clarinettist Joseph Shiner, with Somi Kim at the piano and, for the Trio, cellist Yoanna Prodanova. As so often in Brahms’s paired works, the two sonatas have contrasting characters, the second gentler than the first, although both are highly nuanced, balancing taut structures with expressive, often wistful lyricism. The Trio is an expansive piece which includes in its first movement a theme originally intended for what would have been Brahms’s Fifth Symphony.