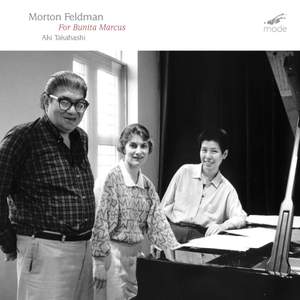 Touch is key. And, having collaborated with Feldman over many years, pianist Aki Takahashi is uniquely placed to understand how to apply it, as this luminous recording shows. Made in 2007 and... — BBC Music Magazine, April 2020, 5 out of 5 stars More…

For Bunita Marcus opens with a clear call to our attention. With these first six notes, we step over the threshold and into the journey of the piece. We know that we are in this for the long haul: Morton Feldman’s late works are notorious for being marathons. He composed For Bunita Marcus in 1985, immediately after his four-hour For Philip Guston, and two years after his six-hour String Quartet (II). These earlier works make an hour-long solo piano piece seem short. Still, it is a long time to sustain a single movement, a single journey, and we inevitably have this in mind as we take the first step: so this is how it starts. For Bunita Marcus, like all the late Feldman works, is an adven-ture that takes a relatively long time to play out, but which is remarkably lacking in heaviness. We may expect an epic, but we get something much subtler. Indeed, what we get is the present moment, in all its beauty, over and over again. If we surrender to the musical image that is right in front of us, a piece like For Bunita Marcusis an easy world to enter into and to explore with Feldman. We step into the silence after that first six-note motto, and we wonder: What comes next? The next hour and a quarter is spent doing nothing more than discovering what comes next—and the next thing after that, and the next after that.

Touch is key. And, having collaborated with Feldman over many years, pianist Aki Takahashi is uniquely placed to understand how to apply it, as this luminous recording shows. Made in 2007 and released now for the first time, the sound is sonorous and immediate, and her control breathtaking. Intimate yet coolly distant, she creates an ever-changing present in which the listener’s ears become fine-tuned to the tiniest shifts in mood and colour.

If you have, and like, other recordings, especially Kleeb’s, don’t feel that you are being cheated out of a complete listening experience. On the other hand, I think anyone who is into this work will want to hear Takahashi’s take on it, given her place as its premiere performer.

Returning to Takahashi each time and you can soon hear why Feldman was so attracted to her playing. The notes have a pearlescent shimmer, and there’s a poetry in the interpretation that is less in evidence in most of the alternatives.