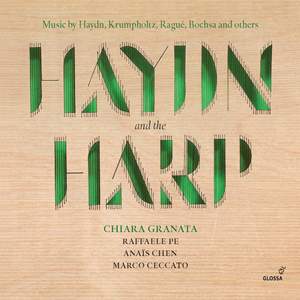 Haydn and the Harp

By its nature, this is not a recital that reaches out and grabs you but it nevertheless provides over an hour of gentle, unexpected pleasure. — Gramophone Magazine, Awards Issue 2019

Haydn: The Rising of the Lark

The Rising of the Lark, Hob.XXXIb:1 (Arr. for Voice & Chamber Ensemble)

For her first solo outing on Glossa, entitled ‘Haydn and the Harp’, Chiara Granata presents a gorgeous demonstration, full of elegance and refinement, of the importance of the harp in the Classical era - and of

Granata’s selection demonstrates how composers strove to get the most out of the harp by pushing for experimental technical demands without forcing its sound or calling for unnatural tempi; this was often with Haydn being involved in providing advice to composers and performers alike.

As further witnesses of Haydn’s penchant for the harp Chiara Granata includes in her programme a selection of folk melodies from the British Isles arranged by the composer, then (in Stendhal’s words) “full of glory and year.” Here she is joined by countertenor Raffaele Pe, violinist Anaïs Chen and cellist Marco Ceccato.

Other composers utilized Haydn’s compositions as inspiration for their own, as can be heard in Nicolas-Charles Bochsa’s Petite Mosaique sur La Creation d’Haydn, or even made arrangements of his symphonies, such as was the case with Louis-Charles Ragué.

Chiara Granata (a pupil of treasured Glossa artist Mara Galassi) plays two instruments built at the time of the compositions making up this delightful programme: a Holtzman harpe à crochet and a single-action harp by

Naderman, the latter employed for the solo tour de force that is Boscha’s Petite Mosaique.

By its nature, this is not a recital that reaches out and grabs you but it nevertheless provides over an hour of gentle, unexpected pleasure.