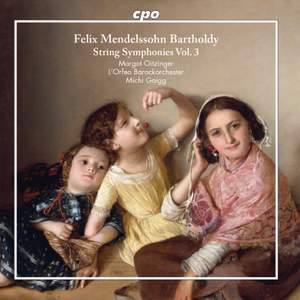 The L’Orfeo Baroque Orchestra under its conductor Michi Gaigg created a sensational stir with its first two Mendelsohn recordings. Klassik-heute declared: "This music absolutely sparkles with élan and joie de vivre. And the realization sends sparks of enthusiasm flying." Most of the first six symphonies from Felix Mendelssohn’s youth do seem to owe a lot to the music of Bach’s sons Wilhelm Friedemann and Carl Philipp Emanuel, but the two symphonies on Vol. 3 of the present complete recording of his early symphonic oeuvre already breathe the spirit of a Haydn or Mozart. A dramatic scene for alto and string orchestra modeled on the dramatic structure of recitative, cavatina, and concluding cabaletta from Beethoven’s famous Ah! Perfido op. 65 and other works rounds off the CD. These component elements depict the dilemma of a heart oscillating between fervor and horror, and in the musical interpretation the string part mostly contrasts with such profound despair and wild passion, thereby opposing the emotional states rendered in song.