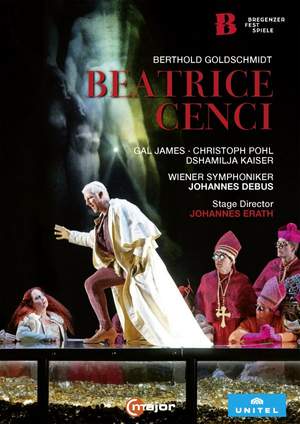 Christoph Pohl has an athletic frame, and his fast, slick movements make the character of the Count all the more maniacal and menacing. His voice is a little light, but Goldschmidt’s clear orchestration... — Fanfare, January/February 2020 More… 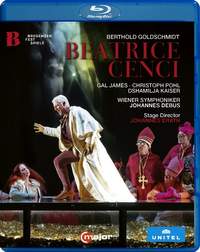 World Premiere recording on Video!Church corruption, human violence & a daughter who plots revenge on her abusive father – Goldschmidt’s Beatrice Cenci has every ingredient for a gripping opera & the story of its origins is equally fascinating albeit tragic: The Jewish composer, who fled Germany for London in 1935, was awarded a prize for his work, but the promised performance never took place. It was not until 1988 that it received its premiere as a concert performance. At Bregenz Festival, stage director Johannes Erath brought Beatrice Cenci on stage for the first time. Although written 70 years ago, 'one musically quickly associates Puccini or other Romantics' (Neue Zürcher Zeitung), underlined by Goldschmidt's own words, saying it became a real 'Belcanto-Opera'. 'Johannes Debus conducts the Wiener Symphoniker with true feeling for the score'. 'In the title role, Gal James is moving' and 'the baritone Christoph Pohl has all the vocal charisma'. (The Telegraph). A 'brilliantly focused staging of a neglected work' (The Telegraph), a 'great, wonderful evening' (Deutschlandfunk Kultur).

Christoph Pohl has an athletic frame, and his fast, slick movements make the character of the Count all the more maniacal and menacing. His voice is a little light, but Goldschmidt’s clear orchestration ensures that he never has to compete. Gal James also looks and sounds the part for Beatrice. Johannes Debus leads a convincing account of the score. The Vienna Symphony bring life and color to Goldschmidt’s music.

The Bregenz performance is unquestionably strong, despite eccentricities in Johannes Erath’s postmodern production…Gal James gives a moving performance as Beatrice, her tone bright and wonderfully secure…The Vienna Symphony play beautifully for Johannes Debus, who propels the score forwards with considerable force, all the while mindful of its lyrical beauty and the myriad details of Goldschmidt’s striking orchestration.

The Bregenz team hit the bullseye by lightening the lurid tone and letting the story speak for itself. There is never a dull moment…Pohl takes the brave route with Cenci…With his baritone in lustrous form, this is a performance to savour…Seventy years on from its inception, this bold revival, aided by intelligent video direction, does timely justice to [Goldschmidt’s] magnum opus.

The Bregenz cast, led by Gal James as Beatrice, with Dshamilja Kaiser as her stepmother Lucrezia and Christoph Pohl as the swaggering, monstrous Francisco Cenci, complete with diamante codpiece, is a very decent one, and Johannes Debus makes sure that Goldschmidt’s whirling, churning orchestral writing gets the attention it deserves.