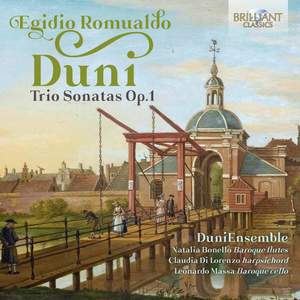 Born near Naples, Egidio Romualdo Duni (1708-1775) enjoyed success with operas presented in Rome and Milan in the 1730s before moving to London in 1736 and then to the Netherlands for a decade. The six trio sonatas were published in Rotterdam around 1739, while the attractive collection of minuets and contredanses appeared in London the previous year. Together they form Duni’s only published collections of chamber music; the greater part of his output remained opera, both serious and comic, and the melodic flair of these works displays the artistic signature of a composer for the stage.

The trio sonatas follow the template for the form laid down by the likes of Corelli and Geminiani. Scored originally for two violins and continuo, they proceed in fast-slow-fast fashion with a melodic flair offset by an unusually elaborate bass line: unlike many comparable collections of domestically scaled music, Duni’s trio sonatas are written not for amateurs but for court musicians both to enjoy for themselves and to give pleasure to others. The minuets and contredanses bear an obsequious dedication to an English noblewoman, indicating that they too were composed to tickle aristocratic palates.

The DuniEnsemble presents the first complete recording of both collections, on period instruments and according to historically informed performance principles – which in this case include a liberal attitude to the instrumentation. The chosen pair of melody instruments is not confined to violins but extended to include flutes and recorders, while the basso continuo part is brought to life by a richly coloured ensemble of bassoon, guitar, mandolin, theorbo, cello and harpsichord, varied work by work. The musicians of the DuniEnsemble presented this music in concert in 2018 at Duni’s birthplace of Matera, but they have been performing as a group since 2003.