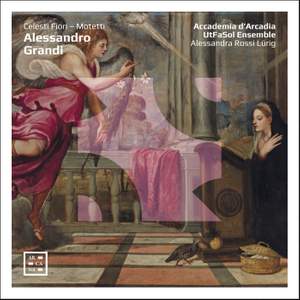 This new recording strikes me as being dedicated, earnest, and sweet-sounding, but I think there is more room for passion and drama. Grandi shines through every performance on every disc. Each... — Fanfare, January/February 2020 More…

Alessandro Grandi (born in Venice in 1590), regarded by scholars as “the greatest motet composer of his time”, was a prominent figure of the new Venetian style in the first half of the seventeenth century. An extremely precocious talent, he was considered by his contemporaries equal to Claudio Monteverdi, to whom he was appointed deputy in 1627 in Saint Mark’s Basilica. Yet our knowledge of his life and musical output is scanty, and thus he has remained mostly undiscovered.

“Celesti fiori” (celestial flowers), a title taken from his Fifth Book of Motets, is the first complete monograph recording dedicated to this important composer. It consists of a selection of works, almost all recorded here for the first time, chosen from his books of motets, all published between 1610 and 1630, the year in which he was killed by the plague, along with his large family.

Recorded in the extraordinary acoustics of the Basilica di Santa Barbara in Mantua, where Monteverdi worked during his long stay in the city, this project features the splendid voices of the Accademia d’Arcadia, an ensemble recently founded in 2018 for the purpose of performing Italian music of the seventeenth century.

This new recording strikes me as being dedicated, earnest, and sweet-sounding, but I think there is more room for passion and drama. Grandi shines through every performance on every disc. Each rediscovered piece brought before the public is a priceless gift which can only add to his growing fame.

Grandi gives performers more than enough to sink their teeth into, and Accademia d’Arcadia and Ensemble UtFaSol respond enthusiastically. Each piece has something different to say about its materials…Grandi’s technical fluency matches his inspiration…truly, this is early music…for people who think they don’t like early music.