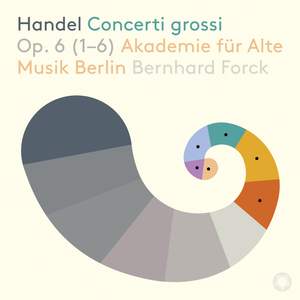 I. A tempo giusto

The Akademie für Alte Musik Berlin kickstarts their Handel trilogy with this recording of the first six concerti grossi op. 6. Originally designed as attractive interludes to English oratorio performances, Handel’s concerti grossi soon gained fame as the most appealing orchestral music of the baroque era. Written in London in 1739, towards the end of his career, Handel paid tribute to the immensely popular concerti grossi of Corelli while simultaneously proving his mastery incorporating all musical styles of his times. Led by their concertmaster Bernhard Forck, the players of the Akademie für Alte Musik Berlin demonstrate why many consider them the best baroque ensemble of today. This first installment will be followed by the last six concerti grossi op. 6, as well as a recording of the concerti grossi op. 3. The ensemble’s first PENTATONE album, Cantata (2018) with countertenor Bejun Mehta, won a Diapason d’or.

Needless to say the playing is good, delivering exciting quick movements and some full-toned slower ones…As far as interpretation goes, it is essentially conventional. First violin Bernhard Forck is named as concertmaster, but this feels like a typically collaborative AAMB effort.

There’s a definite Italianate feel to the concerti – this is of course partly down to Handel’s own writing, but I think equally due to the performances, which seem very much geared towards bringing out this side of the music. The soloist group in particular seems to relish the Corelli-derived virtuosity that their parts incorporate.