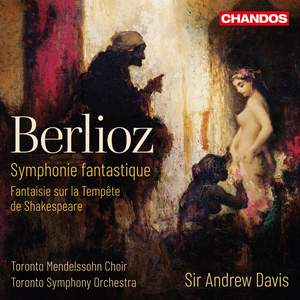 I have no quarrel with the overall grasp here, even if I don’t find anything new in Andrew Davis’s approach – though we may well ask what novelty remains to be found after all these years that... — BBC Music Magazine, September 2019, 4 out of 5 stars (Performance) / 5 out of 5 stars (Recording) More…

The Fantaisie sur la Tempete de Shakespeare was composed shortly after Berlioz had won the coveted Prix de Rome (at the fourth attempt) with his cantata Sardanapale, and was originally conceived as a concert overture, with chorus. After various reworkings of the material, the four-movement Fantaisie, as recorded here, became the finale of Berlioz’s ‘monodrama’ Lelio- a juxtaposition of existing material interlinked with dramatic monologues recited by the ‘artist’ at the center of the work. Symphonie fantastique, Berlioz’s best-known work by some distance, remains an evergreen in the orchestral repertoire, and beloved of audiences the world over. The idiomatic approach to orchestration, grounded in Berlioz’s musical training in French provincial wind-bands, and the revolutionary approach to the prevailing conventions of musical form at the time shine through in the five-movement masterpiece, which remains one of the most vividly programmatic symphonies ever written. This recording was made after a pair of performances in September 2018 in the Roy Thomson Hall in Toronto, and is made in Surround Sound.

I have no quarrel with the overall grasp here, even if I don’t find anything new in Andrew Davis’s approach – though we may well ask what novelty remains to be found after all these years that does not sin against the work’s spirit…Romantic ardour is here in plenty, and the Chandos sound is well up to its resplendent best.

standard work and an interesting coupling in splendid performances.

If Davis had been bolder and stuck to Berlioz’s metronome marks for the symphony’s final movements, this would have been an exceptional account. As it is, the care for dynamics and expression and for the vital lower-string sonorities pays rich dividends.

With the weight of this music’s discographical history bearing down, this is a ★★★★ performance, for all its likeable, and enduring, qualities.