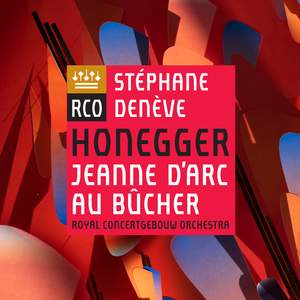 Denève’s spacious pacing is to the work’s advantage in many places…The tension of the final scene at the stake builds steadily, with superb French enunciation from both Dutch choruses and polished... — Gramophone Magazine, October 2019 More…

Jeanne d'Arc au bûcher is one of the most inventive oratorios ever composed, constantly flitting between styles and colours. It follows the historic French heroine in the hours leading up to her execution. Indeed, the run-up to her death sentence is reconstructed as if in a crime novel. Paul Claudel's lively libretto contrasts Jeanne with an assorted lot of strange and wonderful characters. More than enough reason for Honegger to open up a colourful paintbox: the work features a succession of choral passages infused with spirituality, cubist-like blocks of sound and even bits of material reminiscent of the music hall. This is grist to conductor Stéphane Denève's mill, who is a leading authority on French music and a regular guest with the Royal Concertgebouw Orchestra; together with two choirs and a variety of soloists and actors, he realized a compelling and moving Jeanne d'Arc au bûcher.

Denève’s spacious pacing is to the work’s advantage in many places…The tension of the final scene at the stake builds steadily, with superb French enunciation from both Dutch choruses and polished contributions from the solo singers…For an audio-only Jeanne d’Arc, look no further.

It requires large forces, all balanced superbly by conductor Stéphane Denève. Jeanne is a spoken role, taken here by French actress Judith Chemla, heartbreaking in her youth and certitude. She is ably partnered by Jean-Claude Drouot as Frère Dominique, another non-singing role. The large cast is excellent, as are orchestra and chorus.