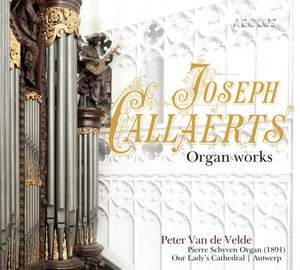 After a fundamental three-year restoration (2014-2017), it sounds again: the famous Pierre Schyven organ (1891) in the Cathedral of Antwerp. The first recording after it's restoration was eagerly awaited...

On the evening of April 13 this year, the approximately 1,000 visitors to Antwerp Cathedral (including Aeolus producer Christoph M. Frommen) listened to the powerful sounds of the recently restored instrument under the fingers of titular organist Peter Van de Velde. The patience was worth it. The instrument has gained some power and abundance through some clever measures (the swell has been raised by two meters, the front has been moved forward by one meter, a large magazine bellow, originally intended but never built-in, has been added) and now even in the back area of ​​the church the sound level is absolutely satisfying. Because a lack of power was said to the instrument already at its inauguration in 1891. In this respect, the result of the recent restoration can be considered as absolutely successful!

For the first recording after the restoration, Peter Van de Velde has selected works by Joseph Callaerts (1830 - 1901). For historical reasons, because Callaerts had been the first titular organist of this famous instrument. Some of the works recorded here are even world premiere recordings (from manuscripts). Many of Callaerts' works have instructions for registrations designed for the Schyven organ of Antwerp Cathedral, and only here they can be realized in exactly the right way. So it will be really exciting to do a comparison "before - after" thanks to Aeolus' recordings!