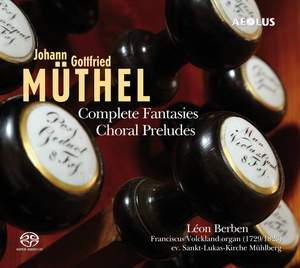 Johann Gottfried Müthel was one of the most important and individual keyboard composers of the eighteenth century.

His compositional style is indebted not only to Johann Sebastian Bach – for he was his last pupil – but particularly to his studies with Johann Adolph Hasse, Carl Philipp Emanuel Bach and Georg Philipp Telemann. Müthel's keyboard works are stamped by the 'empfindsam' style of C.P.E. Bach, but in terms of complexity and emotional expression he takes this a whole step further.

For his recording of Muethel's Fantasies and Choral preludes Léon Berben has chosen a baroque organ that was buit by Franciscus Volckland in 1729 for the Saint Luke's church at Muehlberg (Thuringia, Germany). One century later this instrument has been slighty modified and enlarged in an early romantic sense which makes of it the ideal choice for Muethel's organ compositions.