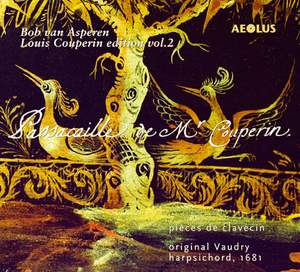 Couperin, L: Suite in A major

AEOLUS presents the second volume of the Louis Couperin Edition with Bob van Asperen. The recording was made on the 1681 Vaudry harpsichord in London’s Victoria and Albert Museum and is currently the only audio document available of this famous instrument. The SACD contains harpsichord suites composed by Louis Couperin, who lived in Paris in the 17th century. Among the pieces is the famous "Tombeau de Mr Blancrocher".

The Vaudry harpsichord is located in the middle of London, rather inconspicuous in the semi-darkness of the basement of the enormous Victoria & Albert Museum. It is one of the world’s most famous historic harpsichords still in playing condition. Undoubtedly due to its exceptional, largely unadulterated state of preservation, it has frequently served modern-day instrument makers as the model for their early-French harpsichord replicas.

Louis Couperin, an uncle of François Couperin, stemmed from Chaumes and built a career as a musician in Paris, however, he died already early, at the age of only 35. Couperin's works show a relationship to those of his German friend and Frescobaldi-pupil, the widely travelled Johann Jacob Froberger, who already has a prominent place (Froberger Edition) in the AEOLUS catalogue. But Couperin's formal language is richer: besides the dance movements Allemande, Courante, Saraband and Gigue, the Gavotte, Gaillarde and others are to be found, particularly the characteristic Chaconne/Passacaille with its bass ostinatos, the refrain-like Grand Couplets, and, like small creative islands, improvisation-like Couplets. Here the Vaudry harpsichord astonishes even in the thickest texture with its noble and transparent sound!

"Guest's composers" play a special role in the Louis Couperin series: while Couperin's friend Froberger is already represented on Vol. 1, works by Couperin's Parisian circle of friends and colleagues are found among the pieces forming the suites of Vol. 2. Thus, some "pearls" are gathered here that are rarely to be heard anywhere else! Among them are arrangements of lute works that are said to have had a model function for the clavecinists, as well as the presumably only surviving piece by the lutenist Blancrocher, who is otherwise known to posterity only through the Tombeaus written on the occasion of his death in Paris.