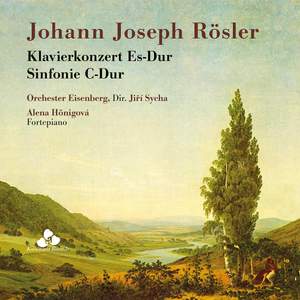 The recordings of the recently discovered Piano Concerto in E flat major and Sinfonia in C major by Bohemian composer Johann Joseph Rosler (1771 - 1812) bring insight into the work of an outstanding musician, who worked in Prague and Vienna at the beginning of the 19th century. Although his creative period was relatively short, he composed more than 200 works and became famous as a talented composer, virtuoso pianist, and popular Kapellmeister. Rosler's name is mentioned in most 19th century dictionaries, but in the 20th century his work was almost forgotten. In addition, he was often confused with the composer Anton Rossler, called Rosetti, a Kapellmeister one generation older from Ludwigslust.

A contemporary of Mozart and Beethoven, Czech composer Johann Joseph Rosler was offered the position of a kapellmeister in 1795 at the Guardasoni Opera Company. In 1805, he accepted an invitation for the position of Kapellmeister at the Court Theatre in Vienna, and in July of that year he entered the service of one of the most important Viennese patrons of music, Prince Franz Joseph Maximilian Lobkowitz. He became a kapellmeister of the Lobkowicz Kapelle (working with Anton Wranitzky and Anton Cartellieri) and accompanied the prince even during his regular stays in his Bohemian residences: in the summer at Eisenberg Castle, in autumn in Roudnitz an der Elbe. Rosler also directed the premiere of his operas at the Estates Theatre. This promising career was unfortunately interrupted by disease. In 1810, the first symptoms of tuberculosis appeared, and Rosler succumbed in January 1812.

Together with the La Vinciolina ensemble, Alena Honigova won first prize in the Gotha Competition at the Handel Festival in Gottingen in 2001. She began working as a harpsichordist and rehearsal pianist at the Schola Cantorum Basiliensis in the same year. In 2002 Alena Honigova formed the Muscadin Baroque ensemble, with which she has premiered several contemporary works, including the chamber opera Racine´s Esther by Boris Yoffe in 2006. Since September 2011, she has led the spiritual barock concerts in the Dominican monastery of St. Giles in Prague. Since summer 2012, she has realised a music festival in the castle Jezeri in north Bohemia. As a soloist, accompanist and chamber musican, she frequently collaborates with many early music ensembles and soloists. As a recording artist, she appeared on numerous solo and chamber music CDs.