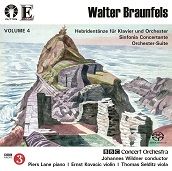 This, the fourth and final volume in Dutton Epoch’s Walter Braunfels series, features conductor Johannes Wildner and the BBC Concert Orchestra, plus guest soloists, in a programme of the composer’s later music. Piers Lane (piano) is the brilliant soloist in the lyrical Hebridentänze, a delightful set of variations on two Scottish folk tunes, while the solo parts of the Sinfonia Concertante are authoritatively projected by Ernst Kovacic (violin) and Thomas Selditz (viola), who are especially effective in the emotional Adagio and contrapuntal Finale. The Suite in E minor presents five contrasted movements composed between 1933 and 1936. Long thought lost, this splendid rediscovery was made possible by the unearthing of the orchestral parts, from which the full score was reconstructed. The earlier volumes in this series have all presented rewarding Braunfels discoveries, and this final volume continues that tradition.