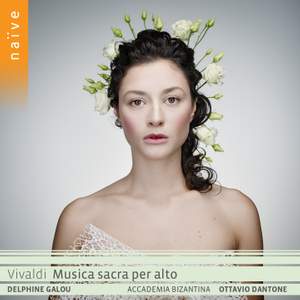 [Galou] Her ability to caress a vocal line, and to give it presence and body, even when she is singing softly, comes to the fore as early as in the central aria (“Sileant zephyr”) from Filiæ... — Fanfare, January/February 2020 More…

Vivaldi, the Venetian, master of the whole palette of human emotions. From the church to the opera house, from tragedy to joy, the immediately-recognisable sensibility, the expressiveness, the inimitable colours and an unbeatable talent to say so much in just a few notes.

The contralto Delphine Galou (who recently won a Gramophone Award, one of the most prestigious awards in the classical music world) and Ottavio Dantone's Accademia Bizantina have created two recitals of sacred music and of opera that illustrate the incomparable richness of Vivaldi’s body of work and establish the emotional connections between the two repertoires.

For the first time, two volumes of the Vivaldi Edition (in this case the 59th and 60th) will be released at the same time, with their synergy also reflected in the albums’ artwork.

The recital ‘Musica sacra’ consists of six works of very diverse themes and styles, symbolising the richness of the religious fervour of Antonio Vivaldi's sacred music.

[Galou] Her ability to caress a vocal line, and to give it presence and body, even when she is singing softly, comes to the fore as early as in the central aria (“Sileant zephyr”) from Filiæ mæstæ Jerusalem.

Filiae maestae Jerusalem and Salve Regina gain in sensual beauty from Galou’s fruity sound, while Regina coeli...is sung by the tenor Alessandro Giangrande. He joins Galou in a jaunty martial Deus tuorum militum, with oboes doing their best to mimic trumpets. The real things are glorious in Regina coeli, conducted with éclat by Dantone.

in Musica sacra she performs Vivaldi’s antifona Salve Regina, (RV618), consisting of six short texts, where she illuminates a range of developing emotions through her verbal accuracy and vocal palette. Likewise the recitative in the Miserere, where she reduces her tones to a whisper of shame, bursts into an emotional line, then pulls back again.