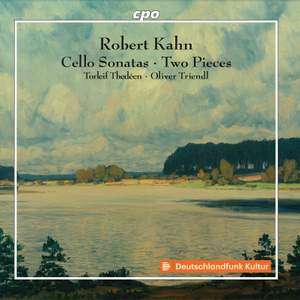 [Triendl] He is a wonderful artist, and he and cellist Thedéen make music most beautifully together. Urgently recommended. — Fanfare, March/April 2020

No. 2, Serenata in A-Flat Major

No. 3, Capriccio in C Minor

Robert Kahn’s early oeuvre was initially classified primarily in relation to composers such as Robert Schumann and Robert Franz. During his later years, however, the influence of Johannes Brahms – which surely was intentional – became clearly audible. This also applies to the three works for violoncello and piano recorded here. Brahms held this composer born in Mannheim in 1865 in such high regard that he even offered him his advice in compositional matters. And in some of the movements of Kahn’s Cello Sonata No. 1 – for example, in the mirthful and playful finale – both Brahms and Schumann are recognizable as very important forerunners who stimulated his compositional development. Kahn’s tendency to compose short expressive pieces is displayed in the Three Pieces for Violoncello and Piano op. 25. The Romance in F minor in the first position is a highly expressive song piece – to a certain extent a »song without words« in the manner of Mendelssohn’s piano compositions of this sort. And from the very beginning of the Cello Sonata No. 2 there can be no doubt about Kahn’s ties to German Romanticism. The thematic design of the first movement could have been thought up by Brahms or even by Beethoven before him. Here too the material is developed and elaborated in the manner of a classically transmitted sonata movement and with a sovereign command of the compositional craft.

[Triendl] He is a wonderful artist, and he and cellist Thedéen make music most beautifully together. Urgently recommended.