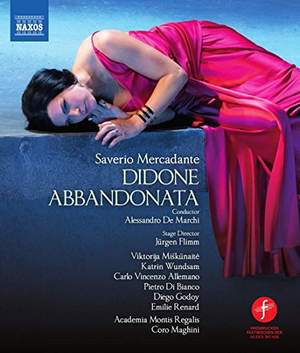 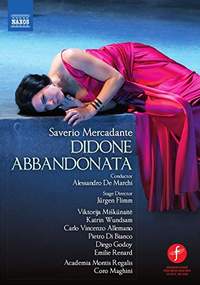 Giuseppe Saverio Mercadante was a contemporary of Donizetti and Rossini, and his prolific output of operas proved influential in founding dramatic techniques that were taken on by Verdi. Set in the ancient and besieged city of Carthage, Didone abbandonata is the dramatic and tragic tale of ill-starred lovers whose decisions ultimately place an entire populace in peril. A genuine rarity in the theatre, Didone has strong ties to the 18th century but also points towards the bel canto innovations that were to come. This carefully researched and critically acclaimed production presents the work in the sound and playing style of Mercadante’s time.

The tragic heroine is explored with a blend of facility and expressivity by Lithuanian soprano Viktorija Miškūnaitė. Flimm’s production mixes periods liberally, and though sometimes its ironic tone gets in the way, the story is effectively told and one becomes increasingly gripped.

[Katrin Wundsam] She has a fruity voice, steady as a rock, and a very good technique. She has been singing on and off stage for over 12 years and the considerable coloratura demands holds no fears for this singer. The orchestra is superb, led by De Marchi with what seems like ideal pacing.

Flimm’s production relocates, updates and distorts the action…That neither Dido nor Aeneas engage our sympathy as composer and librettist surely intended is hardly the fault of the singers, both of whom rise impressively to Mercadante’s virtuoso demands…For all Didone’s musical-dramatic limitations, bel canto fanciers will find much to enjoy here, though for many this will be despite rather than because of Flimm’s production.

Some excellent singers grace this performance, particularly the women, Viktorija Miškūnaitė as the eponymous Didone, Katrin Wundsam as Enea and Emile Renard as Selene.