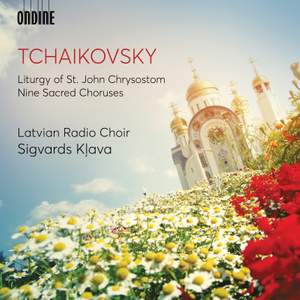 No. 15, Blessed is He Who Comes in the Name of the Lord

No. 7, Blessed Are They Whom Thou Hast Chosen

No. 8, Let My Prayer Ascend

No. 9, Now the Heavenly Powers

In 1877, Tchaikovsky wrote in a letter to Nadezhda von Meck: “I often go to the public worship; in my opinion, the liturgy of St. John Chrysostom is one of the greatest works of art… Oh, I love all that terribly, it is one of my greatest pleasures.” Tchaikovsky enjoyed attending worship services, visited them regularly and was always interested in sacred music, especially in the music of the Orthodox Church. At a relatively early point in his career, in 1875, he issued “A short textbook of harmony, adapted to the reading of spiritual and musical compositions in Russia”, which in 1881 was approved as a textbook of church singing in theological seminaries and colleges. The same year, Tchaikovsky even started editing the works of Dmitry Bortnyansky, a pioneer of sacred Orthodox music. However, he encountered problems with various institutions – the Imperial Chapel, the censorship authorities, as well as some conservative church officials who were more comfortable with smaller-calibre composers, since they could be manipulated if necessary. Tchaikovsky wished to reform sacred Orthodox music but at the same to draw inspiration from the traditions of past centuries. Prime example of this is Tchaikovsky’s monumental work in sacred Orthodox music, the Liturgy of St. John Chrysostom, Op. 41. The Nine Sacred Choruses, which date to 1884–1885, is not a cycle in the basic meaning of the word, but rather a collection, and another affirmation of Tchaikovsky’s skills as one of the greatest composers of Orthodox sacred music. In this album these works are being performed by the award-winning Latvian Radio Choir under the direction of Sigvards Klava.

Klava achieves precise chording and proves sensitive to pacing, with the music’s flow carefully measured. Intonation is close to ideal. In the apt acoustic of St John’s Church, Riga, there’s an impressive sense of perspective, and of wide spaces opening up and resounding with Tchaikovsky’s carefully considered harmonies.

The atmosphere and context – music as extraordinary religious expression – is magisterially conveyed here by a choir on top form, with sound engineering that captures them perfectly...In addition the choir's diction is superb: I do not ever remember hearing the long text of the Creed so clearly articulated.