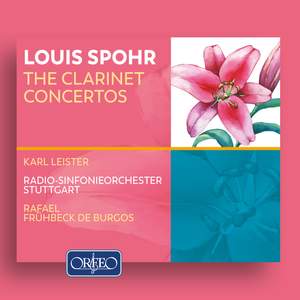 Leister has never been known as a technician per se, but here he shows a transcendent technique in these difficult concertos. He is never flashy, though; indeed, his playing is perhaps understated... — Fanfare, January/February 2020 More…

In the 1830s, Spohr was commonly considered undisputedly the greatest living composer. He was inspired to write his four clarinet concertos, which have always ranked among Spohr’s most popular works, by his acquaintance with the Thuringian clarinettist Johann Simon Hermstedt. Up to today, the decidedly virtuoso clarinet concertos have been a challenge for any clarinet soloist, as they mirror Spohr’s view of the form of the solo concerto as a projection surface to flaunt technical skill in an ideal symbiosis with the poetic and lyrical contents of the music. On this release, the works are performed by Karl Leister. Karl Leister began his solo career as a clarinetist with the Berlin Philharmonic Orchestra under Herbert von Karajan in 1959. At the same time his international career as a soloist and chamber musician began. He is one of the founders of the ensembles Blaser der Berliner Philharmoniker, Berliner Solisten as well as the Ensemble Wien-Berlin. Since the foundation of the Herbert von Karajan Academy of the Berlin Philharmonic Orchestra, Karl Leister has been teaching the young generation.

Leister has never been known as a technician per se, but here he shows a transcendent technique in these difficult concertos. He is never flashy, though; indeed, his playing is perhaps understated but magisterial. Highly recommended.