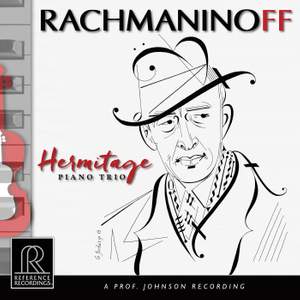 Their playing is consummate, fearless in its bravura, deeply impassioned and dazzlingly flighted (try the Allegro scherzando variation of the D minor’s second movement). Eyes seeking within,... — International Piano, May 2020 More…

The Hermitage Piano Trio is distinguished by its exuberant musicality, interpretative range, and sumptuous sound. Following a recent performance, The Washington Post raved that “three of Russia’s most spectacular young soloists… turned in a performance of such power and sweeping passion that it left you nearly out of breath.” Reference Recordings is proud to present their debut album as a Trio. A rarity in the chamber music world, this elite trio is comprised of three musicians who are noted soloists in their own right. In a performing career spanning forty-five countries on five continents, violinist Misha Keylin is attracting particular attention with his world-premiere series of the seven Henri Vieuxtemps violin concertos. Hailed as “a brilliant cellist” by the legendary Mstislav Rostropovich, Sergey Antonov went on to prove his mentor’s proclamation when he became one of the youngest cellists ever awarded the gold medal at the world’s premier musical contest, the quadrennial International Tchaikovsky Competition. Pianist Ilya Kazantsev, a fresh and exciting presence on the international music scene and a passionate interpreter of his native Russian repertoire – hailed by The Washington Post as “virtually flawless” – has performed as recitalist and soloist with orchestras in Russia, Canada, Europe, and the United States. Among his many awards and honors, Mr. Kazantsev received first prize at the Nikolai Rubinstein International Competition (Paris) and a won the International Chopin Competition (Moscow) and the 2007 & 2008 World Piano Competitions (Cincinnati).

Their playing is consummate, fearless in its bravura, deeply impassioned and dazzlingly flighted (try the Allegro scherzando variation of the D minor’s second movement). Eyes seeking within, they mine the recesses of Rachmaninov’s fantasy, giving us lonely ruminations, finding orthodox choirs and exploring shadowy textures.

the recording is truly splendid, with all three members of the trio and their recording producer collaborating to present us with a superbly effective aural rendering of these early indications of Rachmaninoff's slowly blossoming compositional mastery.

Striking the right balance between interpretative nobility and expressive candour is particularly challenging in music of such claustrophobic intensity, yet the Hermitage Piano Trio ... proves fully equal to the task