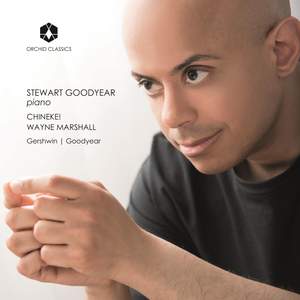 Orchid Classics marks its 100th release with a particularly special album starring some of the most exciting artists of our time: pianist-composer Stewart Goodyear, the Chineke! Orchestra and Wayne Marshall. The release includes world-premiere recordings of Goodyear’s Carnival-inspired Suite for piano and orchestra, named Callaloo in honour of his Trinidadian roots, and his Piano Sonata, an exuberant reflection of Goodyear’s youth. These are heard alongside Gershwin’s magnificent Rhapsody in Blue. Stewart Goodyear has been described as “a phenomenon” by the Los Angeles Times and “one of the best pianists of his generation” by the Philadelphia Inquirer. He is joined by the pioneering Chineke! Orchestra, a vital, vibrant ensemble made up of Europe’s finest Black and Minority Ethnic performers, conducted here by the brilliant conductor, organist and pianist, Wayne Marshall.

[Callaloo] fuses together classical and calypso. The title references a Caribbean dish that blends spices from various cultures and gives a nod towards Goodyear’s Trinidadian heritage…The highly virtuosic Piano Sonata was composed in 1996, when Goodyear was 18. The moments of atonality are offset by a smattering of lush melodies in the second movement; a perfect summary of teenage confusion.

Callaloo is all fun and celebration, more or less at the level of Morton Gould, but I think the piece gains some enduring value from the virtuosic piano part Goodyear has written for himself, which he delivers with both elegance and gusto.