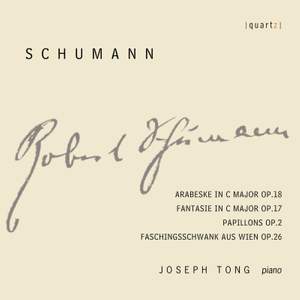 The present release is a programme of Schumann piano solos performed by Joseph Tong. The award-winning British pianist Joseph Tong enjoys a busy and varied career as soloist, duo pianist, chamber musician, Festival Director and teacher. Educated at Wells Cathedral School, Cambridge University and the Royal Academy of Music, Joseph made his Wigmore Hall debut in 1997 as winner of the Maisie Lewis Young Artists Award. Other notable competition successes have included the St Charles International Piano Competition in the USA, the Citta di Marsala Competition in Italy, the ISM Sheffield Competition, 1st Prize in the John Lill Awards and 3rd Prize at the Tokyo International Piano Duo Competition. An English-Speaking Union Scholarship led to a summer spent at the Ravinia Festival near Chicago where he studied with Claude Frank and played to the legendary pianist Shura Cherkassky. Joseph Tong was made an Associate of the Royal Academy of Music (ARAM) in 2008 and also appointed visiting teacher at Wells Cathedral School. He is also founder and Co-Director of the Bristol International Piano Duo Festival which is held biennially at St George’s Bristol and will next take place from 27th-30th October 2016.

Tong’s playing reveals Schumann as a thrilling new love rather than a familiar old friend.

Tong’s readings intelligently balance impulse and discipline, offering wide tonal variety, but never at the expense of textural clarity. His sensitive playing of the Op 18 Arabeske and the dozen short pieces of Papillons, Op 2, works beautifully.