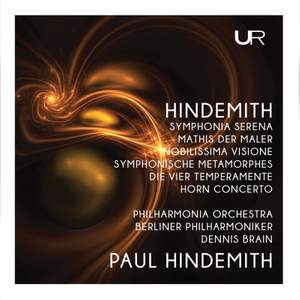 This 2CD box comprises the majority of the stereo recordings made with Paul Hindemith conducting his own symphonic works with the Berliner Philharmoniker and the Philharmonia Orchestra in the mid-1950s.Hindemith recorded some works for English Columbia and some for the Deutsche Grammophon. This set therefore represents a unique opportunity to discover the collected works in one box set.

Urania completes this set with the Horn Concerto performed by the legendary Dennis Brain.

Paul Hindemith (1895-1963) was a German composer, violinist and conductor. Hindemith’s early works are written in the romantic style. He was later influenced by Schoenberg and developed his style into one defined as

neoclassical albeit distinct from that exhibited by Stravinsky. Arguably, his most popular work is the Symphonic Metamorphosis of Themes by Carl Maria von Weber (1943), included in this set.