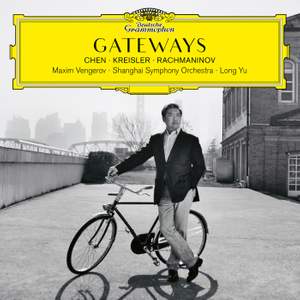 Vengerov plays with commanding authority and haunting eloquence…the Shanghai players storm away with a performance of Rachmaninov’s Symphonic Dances that uncovers a vein of modernism in its textural... — BBC Music Magazine, October 2019, 4 out of 5 stars More…

Chen Qigang: The Joy of Suffering

6. The Beauty of Suffering

8. Get caught up in the madness

The conductor talks to David about his new album with the Shanghai Symphony Orchestra - marking the orchestra's signing to Deutsche Grammophon with a programme of Russian- and Chinese- related works, including two by Shanghai-born composer Qigang Chen.

Vengerov plays with commanding authority and haunting eloquence…the Shanghai players storm away with a performance of Rachmaninov’s Symphonic Dances that uncovers a vein of modernism in its textural restlessness, which often lies hidden beneath a gentle haze of reflective tenderness. Instrumental lines emerge from the music’s textures with an openness and directness that startles at times.

Qigang Chen is something of a sound magician…There are plenty of lovely ideas as well as opportunities for display…The Shanghai Symphony are a formidable band and Long Yu directs them with obvious authority. The Rachmaninov is good but isn’t really a contender in a crowded field (more drive, passion and weight are needed in all three dances).

Vengerov’s sparkle is pleasing, especially after that career-threatening arm injury over a decade ago. But the biggest sonic impact here comes from Long Yu’s excellent Shanghai band, bathed in resplendent recorded sound...the musicians’ suavity is also showcased in a glossy trip through Rachmaninov’s Symphonic Dances.