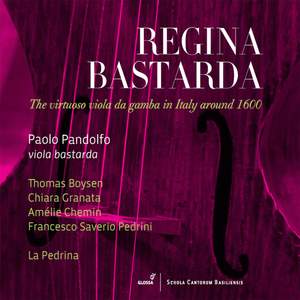 Bassani, O: Toccata per b quadro

Vestiva i colli (After Palestrina)

Popular madrigals and chansons of the 16th Century served as models for richly embellished ‘alla bastarda’ versions on the viola da gamba. In this recording, the vocal originals are presented together with the extremely virtuoso instrumental versions which represent the first and hardly surpassed apex of solo literature for viola da gamba.

For 25 years, Paolo Pandolfo has been one of the leading viola da gambists of his generation, researching and promoting the repertoire of his instruments in all directions. The thorough knowledge of all aspects of the viola da gamba repertoire becomes clear in his extensive discography. Not only has he recorded the most important works of the viol literature but also very personal musical statements in which he combined the youthful experiences as a double bass player and guitarist with compositions and improvisations that are just as influenced by jazz as they are by the historical repertoire. With the bastarda diminutions, he now proffers an early milestone of the solo viol literature in which the exuberant virtuosity serves to present enchantingly beautiful music.

On this very special project, with instruments built ad hoc, he is joined by some of the finest continuo players of the early music scene (Thomas Boysen,

Amélie Chemin, Chiara Granata, Francesco Saverio Pedrini) and the exquisite vocal ensemble La Pedrina, together producing what will be considered a key recording of repertoire for the viola da gamba.