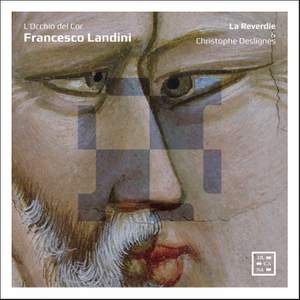 Whether singing or playing instruments, the musicians take great care not to overplay the composer’s subtle, complex counterpoint or to lose a sense of the overall line in the many virtuosic... — Fanfare, January/February 2020 More…

Francesco Landini was the most famous Florentine Trecento composer, known for being a multi-instrumentalist, notably a virtuoso on the organ. As known, he lost his sight at the age of 7 but, despite his disability, he excelled in the study of music and all liberal arts. Might the condition of blindness have affected the poetic production of Landini? La Reverdie together with Christophe Deslignes, investigate this hypothesis, with a new project that presents both well-known masterpieces and pieces never recorded before, searching for signs that might be eventually impressed in the verses and the music of Magister Coecus by the loss of his sight. The reference to the eyes from literary topos becomes in many of Landini’s texts a melancholic poetic expedient to express the distance, the absence or the loss of the beloved woman, that only “the heart’s eye” (L’Occhio del Cor) is able to imagine. A project which fills the recent recording void on a fundamental author at the sunset of the Middle Ages, re-read through a perspective never explored until now. A passionate work on the strict bond between poetry and music, well explained by Davide Daolmi, is associated to a necessary musicological research about sources.

Whether singing or playing instruments, the musicians take great care not to overplay the composer’s subtle, complex counterpoint or to lose a sense of the overall line in the many virtuosic passages. The performances do justice to the sophisticated complexity of the counterpoint without losing the edgy energy that seems to permeate medieval Italian music. The musicians are thoroughly committed to this repertoire and it shows. Highly recommended.

They do everything with verve and commitment, giving each piece its own colour and meaning. To say that their performances are technically flawless is perhaps to miss the point, but that helps everything to work…there is a quality of musical exchange, of understanding where the pressure-points must come and of clear projection that is a rare pleasure to hear.