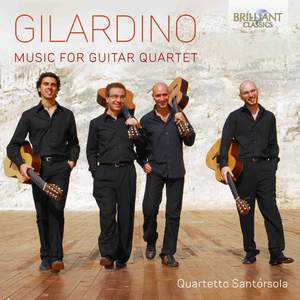 I. Cordóba (Arr. A. Gilardino for 4 guitars)

Premiere recordings of original music and transcriptions, all imbued with the Mediterranean colour and flamboyance of the guitar quartet genre and played with polish by a renowned Italian ensemble.

Born in 1941, Angelo Gilardino enjoys an extensive discography on Brilliant Classics, which has won international acclaim both for the beauty of the music and the authority and sensitivity of the performances. ‘Listen with confidence,’ said the online-jazz.net journal of a trio of guitar concertos (BC94747): ‘Here is transparent art, which does not feel the need to raise its voice: art masterfully built, but in which vitality springs forth. His prime expressive vehicle is the guitar, and he is an absolute master of all its secrets. The album may be enjoyed with uninterrupted pleasure. It represents a perfect introduction to the world of this remarkable composer, who has enriched the Italian tradition with music of real inspiration and high craftsmanship.’

In 2008 Gilardino arranged a set of his solo studies based on the music of Mauro Giuliani and dedicated them to the ensemble on this album, the Quartetto Santórsola. They comprise seven brief pieces, with a dashing tarantella at their heart. The year previously, he had written a three-movement Sinfonietta expressly for guitar quartet, in which each movement pays tribute to an inspirational figure in the history of the instrument from the early part of the last century: Ferenc Farkas, Alexander Tansman and finally Teresa de Rogatis, evoking their musical personalities and playing styles within a fast-slow-fast design that makes for a substantial work in its own right.

Gilardino’s own work is complemented here by his transcription of Andalucia, a piano cycle by the Cuban composer Ernesto Lecuona. As Gilardino himself observes in a booklet essay, the cycle belongs to the Spanish heritage of Albéniz and Granados. ‘It seemed appropriate to make this version for four guitars that, while not competing with the dynamic range of the piano original, nonetheless lives up to the colour and brilliance of Lecuona’s inspiration.’