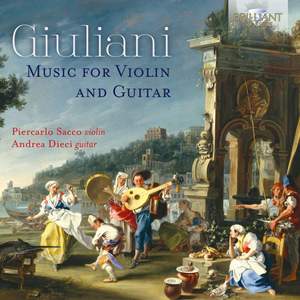 Historically informed new recordings of virtuoso ‘duo concertantes’ scored for a popular 19th-century combination of instruments by the ‘Paganini of the Guitar’.

Born in the south of Italy in 1781, Mauro Giuliani settled in Vienna in 1806 and quickly became famous as the greatest living guitarist. As the city’s leading light in the classical guitar movement, Giuliani was a teacher, performer and composer of a rich repertory for the instrument (nearly 150 works with opus number, 70 without), much of which Brilliant Classics has recorded to an extent unrivalled by any other label.

With this album we turn to the combination of violin and guitar which inspired a great deal of attractive music written for amateur performers, often featuring operatic melodies in variation sets such as Giuliani composed for the opening of his Op.25 Duo Concertant and the second movement of his Op.127 Serenade. Composed in Vienna in 1812, the Op.25 work is the most complex and imposing duo of the genre, beginning with an expansive sonata-form movement and continuing with a lyrical set of variations in which the two instruments alternate between soloist and accompanist.

The influence of Giuliani’s most famous Viennese contemporary can also be felt in the Op.85 Duo Concertant, where an elegant Allegro maestoso is followed by an Andante molto sostenuto of almost Beethoven-like impact. Next comes a Scherzo that begins with a restless series of grace notes on the violin and a slight discrepancy between meter and rhythm that is reminiscent of certain Beethoven scherzos.

The Serenade dates from after Giuliani’s return to his Italian homeland in 1819, and it also reflects a more traditional disposition of instruments, where the violin stars as the protagonist. Nevertheless Giuliani’s invention and Viennese experience may be relished in the brilliance of the concluding Rondo, which includes a disoriented reference to Papageno’s music in The Magic Flute.