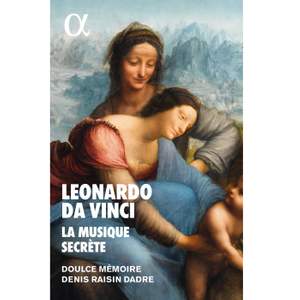 2019 will see the 500th commemoration of the death of one of the greatest geniuses humanity has produced: Leonardo da Vinci, scientist, inventor, painter – and musician.

Doulce Mémoire, having devoted themselves to Renaissance music for the past 30 years, have decided to pay homage to Leonardo. Their founder-director, Denis Raisin Dadre, an eminent specialist in the music of the period and a great lover of pictorial art, has devised an original programme: ‘Rather than just make music from the time of Leonardo, I’ve taken my cue from the paintings themselves. I’ve worked on what could be the hidden music of these pictures, what musical pieces might be suggested by them….’ He chose around fifteen paintings, many of which are now in the Louvre: The Baptism of Christ, The Virgin of the Rocks, Portrait of Isabella d’Este, Portrait of an Unknown Woman (La belle ferronnière), Saint Anne, St John the Baptist… and of course La Gioconda. He then matched them with works by Jacob Obrecht (1457-1505), Josquin Desprez (1450-1521), laude for the Annunciation. There are also some frotolle, and songs to texts by Petrarch accompanied by the lira da braccio, an instrument Leonardo played himself. This recording comes with a handsome booklet, including reproductions of the pictures by Leonardo, some in detail, giving an intimate insight into them; there is also a text by Denis Raisin Dadre explaining his selection.