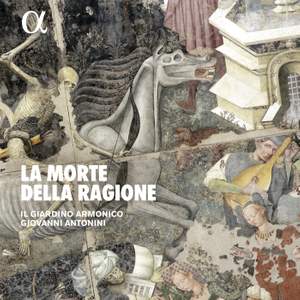 Antonini (Italy’s answer to the Pied Piper) coaxes alluring sounds from his battery of instruments (recorders, flute, dulcian, chalumeau), and the 13 members of his ensemble follow with equal... — BBC Music Magazine, August 2019, 5 out of 5 stars More…

Preston, T: Upon La Mi Re

‘The senses reign, and Reason now is dead’ (Petrarch). Giovanni Antonini, flautist and founder of the legendary Italian ensemble Il Giardino Armonico, enjoys musical voyages, the discursiveness of music. He begins with an anonymous 16th century pavane, La Morte della Ragione (The Death of Reason), which he believes refers to In Praise of Folly, in which its author Erasmus distinguishes between two forms of madness: ‘a sweet illusion of the spirit,’ and a negative form, ‘one that the vengeful Furies conjure up from hell...’ This succession of ‘musical pictures’ leads us to the threshold of the baroque era, starting out with the Puzzle Canon by John Dunstable (1390- ca.1453), whose manuscript is an enigma, via the ‘bizarre’ style of Alexander Agricola (1446- ca.1506) and his obsessive, ostinato rhythm – almost an anticipation of minimalist music…to the improvisatory freedom of the Galliard Battaglia de Scheidt (1587-1654), a battle piece involving a great many diminutions or ‘divisions’, a common technique of improvisation in the Renaissance... This grand instrumental musical fresco of time and space is a kind of self-portrait of Giovanni Antonini and his longstanding musical colleagues. To accompany this disc, a richly-illustrated booklet presents a free-ranging iconographical tour combining pictures and contemporary photos.

Antonini (Italy’s answer to the Pied Piper) coaxes alluring sounds from his battery of instruments (recorders, flute, dulcian, chalumeau), and the 13 members of his ensemble follow with equal virtuosity, brandishing their instruments with particular bravura in the battle pieces. Alpha’s recording is detailed without being oppressive.

Heaving in opulence, ‘La morte della Ragione’ is rich in bass and charged with a sensual energy…A carnival of the weird and wonderful from start to finish.