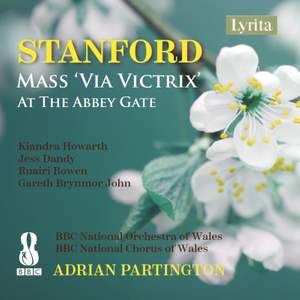 Offer, Stanford: Mass 'Via Victrix' & At the Abbey Gate

In 1919 Charles Villiers Stanford chose to compose a setting of the mass to commemorate the allied victory of WW1. The vocal score was published in 1920 however it lay unperformed for almost a century until the manuscript was edited by Professor Jeremy Dibble and given its first full performance on 27th October 2018 by BBC National Chorus of wales, conducted by Adrian Partington to commemorate the centenary of the Armistice. Coupled here with Standford’s 1920 work for chorus and orchestra ‘At the Abbey Gate’ inspired by the dedication of the Tomb of the Unknown Soldier at Westminster Abbey in 1920.

Rescued from obscurity nearly a century after its composition, Stanford’s large-scale post-war mass is definitely worth checking out. Impassioned performances here.

Symphonically paced and nuanced in its construction, Stanford’s Mass receives an impressive reading from Adrian Partington, his four soloists, and the wonderful voices of the BBC National Chorus of Wales with BBC NOW. Thanks to the editorial work and tireless advocacy of Stanford scholar Jeremy Dibble, this CD again makes available an important British choral work that has lain largely forgotten for over a century.