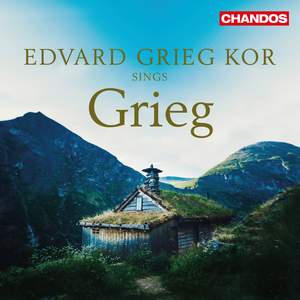 Lang’s Last Spring is a beautiful, distilled and resonant work after Grieg and is nobly sung by the Bergen-based Edvard Grieg Choir here, as is the Norwegian composer’s own choral arrangement... — Gramophone Magazine, July 2019 More…

The Norwegian vocal ensemble Edvard Grieg Kor is the resident acappella ensemble at Troldhaugen, the home of Edvard Grieg. Displaying versatility across all musical genres, they perform regularly with Bergen Philharmonic Orchestra and also form the core of the Chorus for Bergen National Opera. They have had numerous works and arrangements written specially for them by leading composers including Jonathan Rathbone, and David Lang, both of whom are represented here on this the choir’s debut recording. Greig’s Fire Salmer, (Four Psalms) after Norwegian folk tunes (his final opus) and his shorter Ave Maris Stella (performed here in an a cappella arrangement made by the composer) are two rare examples of religion in Greig’s output. Works by fellow Norwegian composers Ole Bull and Agathe Backer Grøndahl, and a sensational and virtuosic arrangement of Greig’s Holberg Suite complete the programme.

Lang’s Last Spring is a beautiful, distilled and resonant work after Grieg and is nobly sung by the Bergen-based Edvard Grieg Choir here, as is the Norwegian composer’s own choral arrangement of his Ave maris stella…A passable start, but this album alienates itself quickly thereafter.

I would certainly like to hear more of them in their eight-voice formation. The documentation in the booklet is excellent while the Chandos sound in both formats is in the best traditions of the house…

A characterful arrangement of the Holberg Suite closes this lovely album from the fresh-voiced Norwegian choir, the sopranos blithely taking the stratospheric writing in their stride. The Four Psalms are another winner, especially the rustic, very secular-sounding Guds Søn har gjort mig fri, which sounds like it’s strayed in from the early stretches of Peer Gynt.