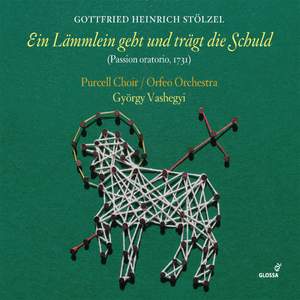 This recording from Hungarian musicians under the direction of György Vashegyi is a fine achievement, and very welcome. The Purcell Choir is a small chamber choir with an attractive, bright tone;... — Choir & Organ, September 2019, 4 out of 5 stars More…

After their recent releases of Conti’s Missa Sancti Pauli and Rameau’s Les Indes galantes, conductor György Vashegyi and his Orfeo Orchestra and Purcell Choir present a world premiere recording of a passion by a today virtually unknown composer, Gottfried Heinrich Stölzel. The name of Stölzel does not ring a bell even with the keenest lovers of Baroque music, even though he was a significant figure in the musical life of Germany in the first half of the 18th Century; he was held in highest respect even by Johann Sebastian Bach himself (to name the greatest authority of all), as documents of the time show.

The work recorded here is a so-called ‘passion oratorio’, a musical form widely used in the German speaking world in the 18th Century built upon a series of lyrical contemplations resting on the story of Christ’s passion. The libretto for Ein Lämmlein geht und trägt die Schuld was written by Stölzel himself.

After listening to the passion of Stölzel, one can only agree with Lorenz Mizler, founder of the Corresponding Society of the Music Sciences and the author of an obituary for the composer: “Germany has lost a great deal with the loss of this skilful and really great Kapellmeister, and it would be desirable that there should be many Stölzels in this regard. His name is therefore and will always be venerated not only by the Society, but by all true composers.” Although Mizler was wrong in his prophecy, as Stölzel has been forgotten until recently, recordings like the present one might start a real, if belated renaissance of Stölzel. He deserves it.

This recording from Hungarian musicians under the direction of György Vashegyi is a fine achievement, and very welcome. The Purcell Choir is a small chamber choir with an attractive, bright tone; the period instruments of the Orfeo Orchestra are led by no less a figure than Simon Standage.

But this music reveals itself from the very beginning: It is sweet. It is melodious. It moves forward effortlessly. It speaks of joy, and love, and hope. It makes few demands on the musicians and the congregation. And it sounds like nothing else I’ve ever heard in a lifetime of Baroque study. Now that this music has been uncovered (and performed so beautifully), it should never again disappear. It must have provided its initial listeners with joy, consolation, and reassurance; and it’s capable of doing that for us as well. Highest possible recommendation.