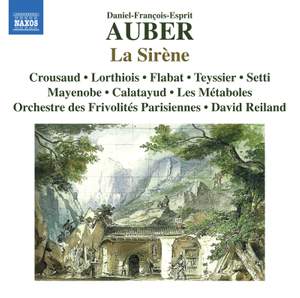 Auber’s music jogs along merrily as the action plays out with reassuring and unthreatening inevitability. The performances on this premiere recording are modest but engaging and entertaining... — Gramophone Magazine, June 2019 More…

Auber earned international adulation in the late 1820s for his revolutionary grand opera La Muette de Portici and by the time he composed La Sirène, the success of which inspired potpourris of its melodies, he occupied a central place in French musical life. The mysterious siren of the title is part of a plot that abounds in fantastic comedy, love, betrayal, farce and festivity in the lineage of Italian popular theatre. The German poet Heinrich Heine wrote that ‘La Sirène was received with resounding bravos … The author and the composer know how to amuse us agreeably, and even to enchant us, or to dazzle us by the luminous facets of their spirit.’

Auber’s music jogs along merrily as the action plays out with reassuring and unthreatening inevitability. The performances on this premiere recording are modest but engaging and entertaining as well. David Reiland secures bright and breezy playing from his appropriately named Orchestre des Frivolités Parisiennes.