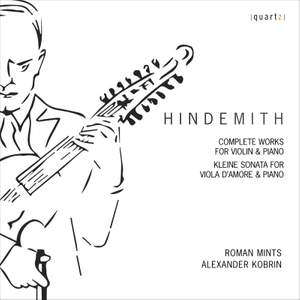 Mints has been an advocate for Hindemith from the outset of his career…[He] plays with the incisiveness and flexibility that these works require but seldom receive, with Alexander Kobrin unstinting... — Gramophone Magazine, July 2019 More…

Recorded for the first time on one CD, Hindemith Complete Works for Violin and Piano and the rarely recorded Kleine Sonata for Viola D’amore and Piano. Roman Mints has had a lifelong love of the works of Paul Hindemith, which began when he was a young violinist, studying in Moscow in the 1980s. He says “This music, written not just before I was born but closer to the time of my grandparents’ birth, felt completely contemporary, and daringly advanced in its sound – and not just to me, as it turns out: 30 years on, Hindemith is still regarded by concert programmers as too difficult for the wider public. I put Sonata in D on the stand. I was gripped by the first subject, constructed from seconds and sevenths, marked to be played ‘with stony defiance’. I was never the same again and he became my window into contemporary music.”

Mints has been an advocate for Hindemith from the outset of his career…[He] plays with the incisiveness and flexibility that these works require but seldom receive, with Alexander Kobrin unstinting in support.

[Roman Mints’] performance of all the pieces recorded here is very strong and committed, with Alexander Kobrin offering an equally impassioned display in this excellent partnership.