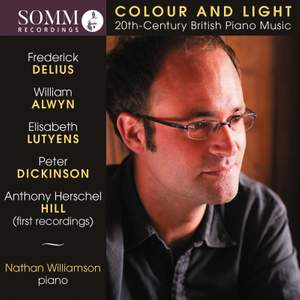 Lutyens: The Ring of Bone

Following Great American Sonatas, his admired debut on SOMM RECORDINGS, pianist Nathan Williamson turns to British piano music of the 20th century in Colour and Light, a revealing exploration of how the past influences the present and the new .A century-spanning programme from Delius’s quixotic 1887 Nocturne (more familiar as An Nacht, the Florida Suite’s finale, here in Robert Threlfall’s 1986 transcription) to Anthony Herschel Hill’s combustible Toccata of 1985 also lights on three other distinctive but highly contrasted composers.

The eclecticism and stylistic contrasts characterising the works on Nathan Williamson’s newest release reveal this pianist’s knack for conceiving intelligent and freshly minted playlists of relatively unfamiliar yet worthy repertoire…In all, a stimulating and sometimes provocative release.

Nathan Williamson’s Colour and Light is a memorably enterprising programme of British piano music performed with
unwavering commitment and intensity.

This is an interesting representation of British piano music across the 20th century. The chief novelty is the arrangement by Ravel of excerpts from a Delius opera, Margot la Rouge, prefaced by the nocturne from his Florida Suite (Robert Threlfall’s transcription).