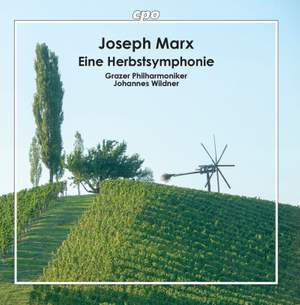 it’s a breathtaking piece, with gorgeous colors, some exceptional harmonic progressions, and the kind of contrapuntal complexity that can give you an ecstatic vertigo. Rest assured—if you buy... — Fanfare, January/February 2020 More…

The magnificent Graz premiere of Joseph Marx’s Herbstsymphonie (Autumn Symphony) was held on 28 September 1922 under the expert conductor and sound specialist Clemens Krauss. It was a great triumph for Marx, and when Krauss selected this work for a concert program in Vienna in late May of the following year, the public went wild. The Herbstsymphonie is not so much a symphony in the traditional sense as a multimovement rhapsody of massive proportions, both in view of its huge orchestral dimensions and its performance length. For this reason this gigantic composition ranks as one of music history’s most lavishly instrumented works. Until now Joseph Marx has been known primarily as a composer of songs and chamber music. However, already in 1911 he had composed the sumptuously designed cantata Herbstchor an Pan (Autumn Chorus to Pan), a work that also in its choice of theme may be said to herald the coming of the Herbstsymphonie.

it’s a breathtaking piece, with gorgeous colors, some exceptional harmonic progressions, and the kind of contrapuntal complexity that can give you an ecstatic vertigo. Rest assured—if you buy it, you’ll be rewarded.

The orchestra plays splendidly and Wildner is magnificent. A triumph.