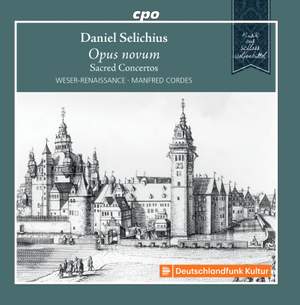 pretty much ideal performances of music by a composer who fully deserves our attention. — MusicWeb International, October 2019

Opus novum: No. 4, Der Herr erhöre dich in der Not

During the third concert in our series Music from Wolfenbüttel Castle in 2017, sacred compositions from the Opus Novum of Daniel Selichius were presented and recorded. Selichius was born in Wittenberg in 1581 and succeeded Michael Praetorius as court chapel master in Wolfenbüttel during 1621-26. His oeuvre includes the twenty-four sacred concertos of his Opus Novum of Sacred Latin and German Concertos and Psalms of David. This collection published in Wolfenbüttel in 1624 was one of the earliest printed collections of fully dimensioned sacred concertos in Protestant Germany. For these concertos we once again have obtained the services of the Weser-Renaissance Ensemble of Bremen under its conductor Prof. Dr.Manfred Cordes. This ensemble specializes in early music and over the decades has produced interpretations of Baroque music regarded as exemplary in this field.

pretty much ideal performances of music by a composer who fully deserves our attention.