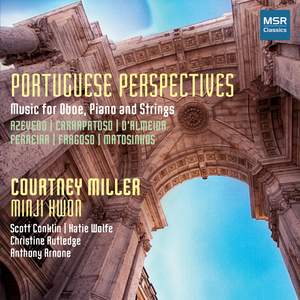 II. Swinging in the Rain

American oboeist, Courtney Miller, has chosen six, mostly Contemporary, pieces by little known Portuguese composers for her MSR Classics recital. While most listeners can name quite a few Spanish composers and others who wrote in Spanish idioms, they might be hard pressed to name a Portuguese selection.

The oldest composer represented is Antonio Fragoso (1897 - 1918), with his four movement Suite Romantique of 1916. Its oboe lead may bring thoughts of Ravel. The remaining pieces date between 1999 - 2017.

In these Courtney Miller is accompanied by pianist Minji Kwon. The exception being the Oboe Quintet, of 2004, by Sergio Azevedo, which features a string quartet.

These unfamiliar pieces are put into context with biographical and programme notes by Courtney Miller and some of the composers. MSR Classics recorded this disc in the University of Iowa, yet it is easy to imagine listening to it from the Portuguese Perspective revealed as you extract the disc!