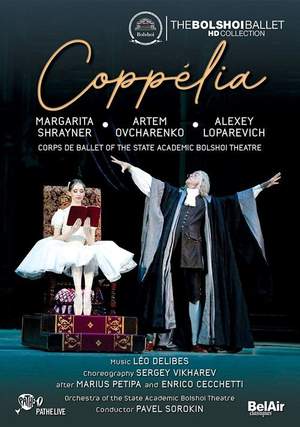 Léo Delibes’s Coppélia is not only a collection of fine dances. It is primarily an abrasive and sardonic comedy, which is somewhat unusual in the world of classical ballet. But most importantly, it is a comedy for which excellent music was composed. Pyotr Ilyich Tchaikovsky’s assessment of Delibes’s ballet scores, allegedly capable of overshadowing the choreography itself, is well known: “What beauty, what elegance, what richness of melody, rhythm and harmony!” It is not fortuitous that music from this ballet should be performed, for its own merits, during concerts. Funnily enough, the main theme of this light-hearted ballet is taken from E.T.A. Hoffmann’s anything but joyful novellas – mainly from The Sandman. In Hoffmann’s tale, the young man’s infatuation with the doll ends tragically, while in the ballet, the lively and energetic Swanilda (Frantz’s fiancée) is able to over with the old Coppélius, the cunning inventor of the “Girl with the enamel eyes” and free her lover from the doll’s poisonous charm. Coppélia was premiered in 1870 at the Paris Opera on choreographer Arthur Saint-Léon’s initiative. A virtuoso dancer, Saint-Léon was Marius Petipa’s predecessor as Head of the Petersburg Ballet. His interest in folk culture, music and dance, is mainly responsible for the appearance in the music score of such a rich “selection” of dance melodies based on folklore, and especially Slavic and Eastern European themes. A few years later, Marius Petipa and Enrico Cecchetti brought the ballet “back” to the Russia that had proved such a vivid source of inspiration for its librettist, and adapted the choreography for the Russian stage. However, this new version fell out of interest during the XXth century, until Sergey Vikharev and Pavel Gershenzon’s revival in 2009. It is here interpreted by the Bolshoi Ballet’s finest dancers: Margarita Shrayner is the witty Swanilda, and Artem Ovcharenko the love-sick Frantz.