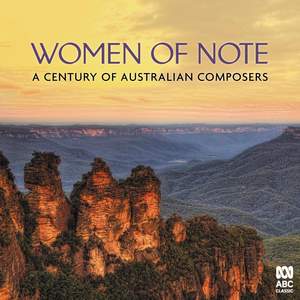 Women of Note: A Century of Australian Composers

Hyde, M B: Piano Concerto No.1 in E flat minor

Boyd, A: As I Crossed A Bridge Of Dreams

I. Lively and steadily

III. With energy and bounce

This 2CD mid price compilation is a fascinating journey through the history of Australian composition, highlighting just how much of that history has been written by women.

Australia has always punched above their weight musically, female musicians especially - Nellie Melba, Joan Sutherland and Eileen Joyce in particular loom large among the finest musicians of the twentieth century. But beyond these celebrated performers, the history of Australia’s female composers is equally outstanding.

Miriam Hyde, Dulcie Holland and Margaret Sutherland were hugely influential in the early years of Australia’s musical development. Peggy Glanville-Hicks and Anne Boyd looked beyond their borders to the musical traditions of other cultures, and sought to find a place for Australia among the community of musical nations.

Elena Kats-Chernin is a phenomenon unto herself, arguably Australia’s most popular and best known composer. Yuin woman Brenda Gifford brings insights from her Indigenous culture to the Western classical tradition. And composers such as Sally Whitwell, Maria Grenfell, Kate Moore, Nicole Murphy and Olivia Bettina Davies represent the myriad ways in which classical music is developing in the 21st century.