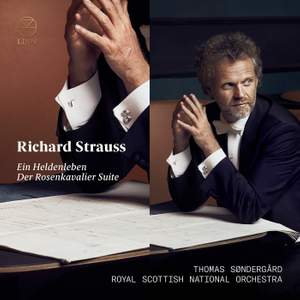 I like this performance of the Suite by Søndergård and the RSNO. It does a good job of capturing the hedonism, sensuality, nostalgia, and angst that are embodied in the humid, somewhat oppressive,... — Fanfare, January/February 2020 More…

This recording is the first in a new series with Thomas Søndergård and the Royal Scottish National Orchestra. The programme features music by Richard Strauss: the concert suite from Der Rosenkavalier and Ein Heldenleben, a work they have performed together in concert to critical acclaim. The tone poem tells the epic story of an imaginary hero and offers a stirring introduction to the world of the German Romantics.

Strauss demands uncompromising virtuosity from both the orchestra and the horn player who is tasked with portraying the bold hero. Following a concert performance of Ein Heldenleben in March 2018 The Scotsman stated: “From the swaggering confidence of Strauss’s bounding heroic theme to the gleefully grotesque carpings of his critics, Søndergård delivered a bold, utterly committed account – this is clearly music that matters to him.” Closing the recording is the concert suite from Der Rosenkavalier in which Strauss’s colourful and evocative orchestration recalls many favourite moments from his most popular opera.

At the start of the 2018-19 season Danish conductor Thomas Søndergård extended his role with the RSNO to Music Director, after six seasons as Principal Guest Conductor. He served as Principal Conductor of the BBC National Orchestra of Wales from 2012-18 and, prior to this, as Principal Conductor and Musical Advisor of the Norwegian Radio Orchestra for three seasons. Søndergård has conducted many leading orchestras and is also an experienced opera conductor, at home in mainstream and contemporary repertoire.

The RSNO plays an integral part in Scotland’s musical life and appears regularly at the Edinburgh International Festival, the BBC Proms and the St Magnus International Festival, Orkney. The orchestra has a worldwide reputation for the quality of its recordings, receiving two Diapason d’or de l’année awards and eight Grammy Award nomination.

I like this performance of the Suite by Søndergård and the RSNO. It does a good job of capturing the hedonism, sensuality, nostalgia, and angst that are embodied in the humid, somewhat oppressive, turn-of-the-century atmosphere of a grown-decadent Viennese waltz culture. It’s almost Mahlerian in that respect.