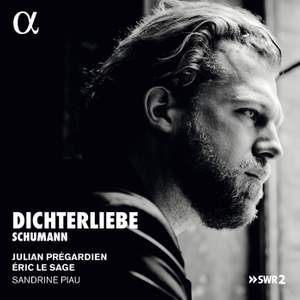 Julian Prégardien decided to record the Dichterliebe cycle after he came across the new Bärenreiter edition; he went on to explore the work in concerts with his constant accompanist, Eric Le Sage, inserting other works by Robert and also by Clara Schumann, whose bicentenary is celebrated in 2019. When Clara played the Dichterliebe in the 1860s, she used to slip extracts from Kreisleriana between the songs. Prégardien asked Eric Le Sage to record the same extracts on a Blüthner piano of 1856, the year of Robert’s death, and also to include Romances composed by both Robert and Clara at a time when their future marriage was still uncertain.

The sublime ballade Löwenbraut also forms part of the programme – a reminder of the young Robert’s anguish on Clara’s departure. At Julian’s suggestion, Sandrine Piau was invited to sing three duets: a simple Canon composed by Clara, and two duets by Robert, Wenn ich ein Vöglein wär, and the sublime In der Nacht. Four further songs complete the disc: Sängers Trost, a short piece in belcanto style; Kurzes Erwachen, composed by Robert at the age of just eighteen; Aus den hebräischen Gesängen, a very melancholy song; an extract from the cycle Myrthen (Robert’s wedding present to Clara); and Mein Wagen rollet langsam, a song that was included in the composer’s first version of Dichterliebe.

The Dichterliebe songs micht have been expected to show Schumann triumphantly rejoicing in that year of 1840 when he was finally able to marry Clara; and yet they are characterised by bitter irony, nostalgic Sehnsucht, and a sense of dread…

Listeners who know Dichterliebe intimately, and think they know the Schumanns pretty well, will discover many fresh delights.

There is more on this riveting disc than I have room to mention, but the full flavor is here, and what a feast it is. This is glorious Schumann.

The disc’s main event, of course, is Dichterliebe, and it’s a highly committed performance that’s fully realised on its own terms…Prégardien brings to the music a superb command of German, a lyrical line undistorted by vibrato, and a readiness to embrace declaratory moments beyond the typical poise of Lieder recitals…Compared to Le Sage’s past Schumann recordings of more modern instruments, however, he seems a bit inhibited here.

Exquisitely sung and imaginatively programmed, Prégardien’s second album for Alpha centres on the build-up to the Schumanns’ marriage in 1840, and accordingly conjures an atmosphere of jittery excitement and foreboding...the beating heart of the recital is a fierce, genuinely unsettling Dichterliebe, suggesting that the lighter Wagner roles might figure in Prégardien's future.