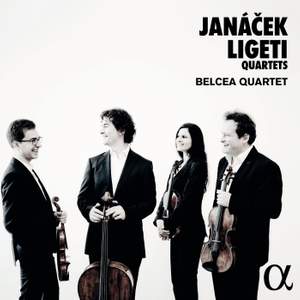 The main interpretative obstacle in the First Quartet is how to gauge the progression of its first three movement so the finale is a culmination without obliterating that went before. The Belcea... — Gramophone Magazine, July 2019 More…

Formed in 1994 at the Royal College of Music in London, the Belcea Quartet already has an impressive discography, including the complete Beethoven string quartets (ALPHA262). For this new recording, the ensemble has chosen three quartets by two iconic composers of the 20th century: Leos Janáček and György Ligeti. Fifteen years after their first recording for Zig-Zag, and after some changes in personnel, they have decided to record again the two string quartets by Janáček. The First Quartet was inspired by Leo Tolstoy’s famous novella, The Kreutzer Sonata: the fourmovement work follows the narrative, including its culminating murder. The Second Quartet is subtitled Intimate Letters, in homage to Kamila Stösslova, with whom the composer had an important relationship expressed through letters, one that influenced both his life and his music. Finally, the First Quartet by Ligeti, subtitled Métamorphoses nocturnes because of its particular form. The composer described the work as a sort of theme and variations, but not with a specific theme that is then subsequently varied: rather, it is a single musical thought appearing under constantly new guises – for this reason the word ‘metamophoses’ is more appropriate than ‘variations’.

The main interpretative obstacle in the First Quartet is how to gauge the progression of its first three movement so the finale is a culmination without obliterating that went before. The Belcea succeed admirably in this respect…[They] conveys the Ligeti’s reckless audacity while being mindful of the metamorphic process which ensures overall cohesion. This is recommended if this particular coupling appeals.