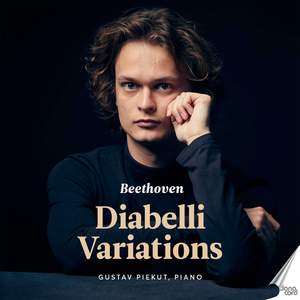 Gustav Piekut (b. 1995) is establishing himself as one of the most interesting young classical musicians in Scandinavia. He has been described by the West-Deutsche Allgemeine Zeitung as 'a poet and virtuoso at the piano' and 'stunned the audience with his transparent playing and sense of timing' according to Hamburger Abendblatt. After debuting with the South Jutland Symphony Orchestra aged 12, and appearing two years later as a soloist with the Danish Radio Symphony Orchestra, Gustav Piekut regularly travels across Europe for recital, concerto and festival performances. This is Gustav Piekut’s debut recording.

A bold choice of repertoire for debut recording from a young Scandinavian pianist.

The young Dane proves himself worthy of the risk, and provides the listener with an increasingly compelling journey through Beethoven’s challenging stop-start musical landscape... His sound is as quiet and controlled as it possible to be, and the effect is truly luminous…