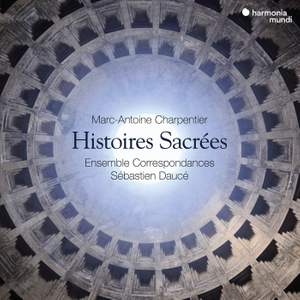 Marc-Antoine Charpentier is the only composer of the age of Louis XIV to have distinguished himself so remarkably in the genre of the ‘sacred history’: he wrote more than thirty such works, all composed after his residence in Italy.

Sébastien Daucé and the Ensemble Correspondances have carefully extracted from this outstanding corpus a number of gems that reflect both his experience in Rome (probably studying with Carissimi, the master of the oratorio) and the humanist concerns of an entire period.

Like a miniature opera, each piece relates an exemplary destiny, including several strong-willed women (Judith, Cecilia, Mary Magdalene) and a deep friendship put to the test (Mors Saülis and Jonathæ).

Don’t expect high drama and showy vocals: Charpentier’s idiom is subtly understated, and the Latin texts…were intended to edify rather than entertain. Sebastien Daucé judges their tone sensitively in these chamber-like performances with a team of well-matched singers. It’s a treat to hear the sable-toned alto Lucile Richardot as the penitent Magdalene, the supple voice of Caroline Weynants as Judith, and soprano Judith Fa, a radiant Saint Cecilia.

This is superb. Here is a generous selection of sacred pieces by Charpentier, impeccably performed by Ensemble Correspondances under Sébastien Daucé, [...] underpinned by violins, recorders and those plangent viols. Do not miss these wonderful performances.

You can enjoy Vincent Huguet’s starkly beautiful modern-dress stagings on the bonus DVD, but the taut theatricality of these performances of Charpentier’s Biblical dramas comes across loud and clear through the audio alone; Caroline Weynant’s serenely assertive Judith and Lucile Richardot’s sensual Mary Magdalene are especially compelling, but every single singer is unfailingly invested in the action throughout.