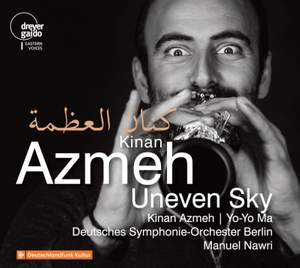 Among his own works, Suite for Improvisor (2008) readily confirms his maxim that the best notated music sounds spontaneous whereas the best improvised music sounds structured…Turning to the music... — Gramophone Magazine, July 2019 More…

Azmeh: The Fence, the Rooftop, and the Distant Sea

Jabri: Concerto for Clarinet and Orchestra

Syrian clarinettist Kinan Azmeh talks to David about his new double album showcasing his own compositions and those of three other composers from his native country.

One CD presents Kinan as interpreter of his own music while the second CD presents three clarinet concertos that were written for him by the Syrian composers Kareem Roustom, Zaid Jabri and Dia Succari.

Finally it presents the most recent of Azmeh’s works, The Fence, the Rooftop and the Distant Sea, a duo for clarinet and cello written for himself and Yo-Yo Ma, commissioned by the Elbphilharmonie in Hamburg and first performed there in January 2017. The resulting 2-CD set is an explosion of sound which lifts you off your seat in wonder at the expertise and energy of his performance. Incredible!

Hailed as a “Virtuoso” and “Intensely soulful” by the New York Times, “Spellbinding” and “Brilliant” by the New Yorker, and “Incredibly rich sound” by the CBC, his utterly distinctive sound across different musical genres has gained him international recognition as a clarinettist and composer.

Kinan Azmeh has been touring the world as soloist, composer and improviser and has appeared at the Opera Bastille, Paris; Tchaikovsky Grand Hall, Moscow; Carnegie Hall and the UN’s general assembly, New York; the Royal Albert Hall, London and the Damascus opera house for its opening concert in his native Syria. He has appeared as a soloist with many of the world’s best orchestras and has shared the stage with Yo-Yo Ma, Marcel Khalife, Aynur, Daniel Barenboim, John McLaughlin and Jivan Gasparian.

He serves as artistic director of the Damascus Festival Chamber Players, a pan-Arab ensemble dedicated to contemporary music form the Arab world. He is also a member of Yo-Yo Ma’s Silk Road Ensemble with whom he was awarded a Grammy in 2017. Oscar-winning filmmaker Morgan Neville portrayed Kinan in his latest documentary, Music of Strangers.

“Uneven Sky is about home, the multitudes of homes, and it was made with lots of optimism and love. Syria may not be on the cover of this album but it is present in every detail of the music, and certainly in my heart.” - Kinan Azmeh

“Home is ever-present and elusive. There and here. Then and now. Lost and found. Listening to this album, we find both the search for home and home itself.” - Ara Guzelimian

Among his own works, Suite for Improvisor (2008) readily confirms his maxim that the best notated music sounds spontaneous whereas the best improvised music sounds structured…Turning to the music by other composers and both concertos adumbrate powerful emotional responses…Ara Guzelimian’s notes provide a succinct basis for evaluating Syria’s recent contribution to Western classical music.