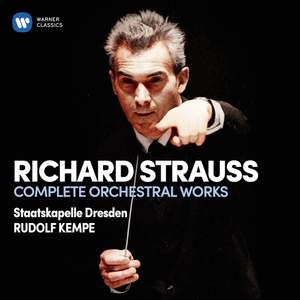 No. 4, Der Eintritt in der Wald

Rudolf Kempe’s recordings of Richard Strauss have long been prized for their unparalleled clarity and subtlety in music that has come to define the late-Romantic temperament and its expression of highly strung emotions, whether in a state of Nietzschean exaltation, on the summits of Also sprach Zarathustra and the Alpine Symphony, or in the post-war despair of Metamorphosen. Even in his lighter moods, such as the early and carefree Aus Italien and the late concertos for wind instruments, Strauss loves the complex textures that Kempe and the Staatskapelle Dresden clarify with the utmost skill and sympathy. A classic set, remastered from the original East German master tapes.